Since our middle child was a baby, he had developmental difficulties. When he was two and a half years old, we finally got an evaluation to confirm he was delayed in four areas: cognitive, communication, speech, and fine motor skills. He began getting speech and occupational therapies right away. He showed many signs of Autism and when he was four, he was evaluated for that. We had to drive 4 hours out of town for an all day appointment. They diagnosed him with “severe global developmental delays” and “borderline mental disability”. They verbally told me that at best they’d put him as having high functioning Aspergers, but that was the year that that diagnosis was being removed and integrated with ASD and he did not qualify based on the new criteria. 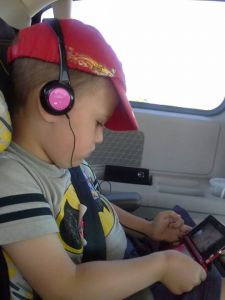 Fast forward. Our son is now 8 and just completed his second year of 1st grade with no specialized education plan (he never qualified once he was put into kindergarten). Towards the end of the school year, he started regressing cognitively and emotionally. He also began wetting the bed and seeming rather tired. I assumed that he was struggling to keep up with his class again and we’d likely have another evaluation to get him help. He mentioned he was being teased at school and my husband and I also thought his issues were signs of bullying. We just needed to wait it out til the summer and he could rest and next year will be better. Unfortunately, it only got worse.

One night, we went to pick up Gramma and Grampa from the airport. They were coming to visit us in Michigan for three weeks! For dinner, we ate at a restaurant where he had pancakes and two whole root beers. At bed time, he threw up. Over the next week and a half, he was thirsty non-stop, moody, tired, peeing several times an hour, and started resembling a child who was a holocaust victim; so thin you could see his ribs and hips, among other bones. We called the doctor on a Thursday and were told to bring him in Monday. We called the 24 hour nurse hotline from our insurance on Friday and were given emergency signs to watch for and to bring him into the doctor on Monday. Saturday night, I decided that I wasn’t going to bed another night worrying that he wasn’t going to wake up. After referring to a few friends, we decided to take him to an Urgent care around 9 o’clock in the evening. I told them I needed a blood sugar test for my son. They checked his urine for glucose and ketones (the byproduct of burning muscle for energy) and they checked his blood glucose level. His urine test showed high amounts of glucose and ketones and his blood glucose level was too high for their monitor to read it. They sent us to the ER and called ahead for us.

At the ER, we received prompt service, passing others who had been there before us. They did a blood draw and started an IV drip and told us we’d be admitted. Not much longer, they returned and informed us that we were going to be admitted to the Pediatric Intensive Care Unit for Type 1 Diabetes. After being transferred from the ER to the PICU, they started an IV drip of insulin and took more blood for testing. Later I found out his blood glucose levels were 599. The normal range for a child ages 6-12 is 80-180. His blood tests showed that he was borderline DKA (Diabetic Ketoacidosis), his blood was turning acidic and at any moment it could have crossed the line and he could have slipped into a coma. My fears of him going to sleep and not waking up were validated.

The next few days were almost a blur. Filled with little sleep, and lots of information about how to manage Type 1 Diabetes. We came home 5 days ago and his physical turnaround has been amazing. He no longer looks like he’s dying for starvation. He’s happy and energetic again. We have a long way to go mentally and emotionally. It’s very hard to accept a life-long diagnosis, but with our strength and courage, hopefully he’ll gain perseverance and pride of life.